If you want a reliable internet connection from anywhere in the United States, no matter how remote, there is only one option- satellite internet. Mobil Satellite Technologies offers the most affordable RV satellite internet antenna on the market, along with the most versatile service plans to match your unique needs.

For trailers, camper vans, and RVs, satellite internet is the best option for staying connected in very remote areas. For travelers that stick to within cellular range or are on a tight budget, cellular data plans may be an option as well.

Our most popular RV satellite antenna. Durable and dependable, this self-pointing antenna connects with the touch of a button. Great for RV owners that need to stay connected to work even when they’re remote. This is the lowest-cost auto-pointing satellite internet antenna in North America. 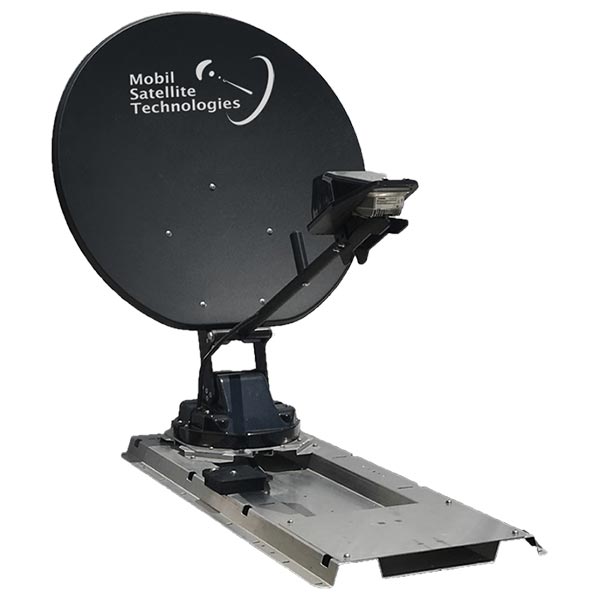 The most affordable auto-pointing RV satellite internet antenna for the HughesNet network. Connect from virtually anywhere in the United States with speeds up to 25Mbps download and 3Mbps upload.

Our most robust antenna for RV and enterprise use. This mobile satellite internet dish ensures the highest possible bandwidth, though comes at a price point and size above the DataSat 840. For consumers and companies that need the best when they travel, the DataSat 1200 delivers. 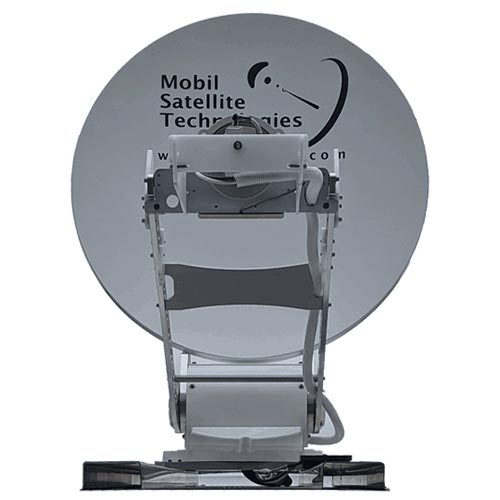 The iDirect Access plans are full-time, always on, un-metered service plans. These plans allow unlimited web surfing, email, and other common web applications. But, to maintain network quality for all users, applications like VoIP, video, Skype ™, Netflix ™, Hulu ™, and all of the other services that require a constant non-bursting stream of data to operate are given very low data rates and very low data packet priority within the network. If you desire to use your Netflix account over your satellite Internet connection we recommend our RV Entertainment service plans below.

All of our plans are for a one-year contract and include 7 days a week USA technical support from the experts at Mobil Satellite Technologies.

Streaming Netflix or Hulu Over Satellite?

RV Entertainment service plans are for RV enthusiasts who regularly use Netflix, Hulu, or Amazon Prime for their video entertainment. Using these streaming platforms over a cellular connection can be a very painful experience if you are very remote. The RV Entertainment plans are full-time, always-on satellite broadband plans that have a fixed monthly cost and include a late-night “Free Zone”, when Netflix movies and TV shows can be downloaded at full network speeds. We recommend using this time to download the movies and entertainment you will need for the following day.

*RV Entertainment plans have a night time free zone from Midnight to 6:00 AM EDT.

Now you can enjoy reliable phone service in any location, with no spotty coverage or dead zones. Satellite voice over IP (VoIP) uses your Internet connection to complete your calls.

Let's Walk Through Your Options

Leave your information below and we will be in touch promptly.

Why is this so much more expensive than HughesNet?

Mobile satellite internet is a much more complicated, technically-involved service than stationary satellite internet. Because of this, different service and equipment are needed. If your budget doesn’t allow for the increase in cost, we recommend our RV cellular services.

Can I be connected to the internet while traveling?

Unfortunately, no. All land-based mobile VSAT dish systems require the vehicle be parked to connect, and can even be damaged if the vehicle is traveling while the antenna is deployed.

How does satellite internet work?

Data is sent from a teleport up to a geo-stationary satellite in a semi-permanent earth orbit about 23,000 miles out into space. The satellite receives the data, amplifies it, and then re-transmits it down to earth in a specific pattern called a beam, where it is received by a satellite antenna called a terminal.

How secure is satellite internet?

Each router or Wireless access point we sell comes preconfigured with security already built in.

How does the dish find the satellite?
Press the deploy button on the controller will deploy the dish. As long as it can find a signal, the antenna will lock on to the satellite usually within 3 to 9 minutes.
Will my VPN work over satellite?

VPNs can be very challenging over satellite. VPNs tend to bypass the TCP acceleration and web page acceleration that is built into the network, and as a result, the throughput of the network connection can be reduced by as much as 75%. We do offer several “satellite friendly” VPN solutions, so there are workarounds available to make VPN work with our satellite service.

Leave your info below and we’ll be in touch shortly to make sure you’re in the network range and a good fit for our service.

Leave your info below and we will be in touch shortly.